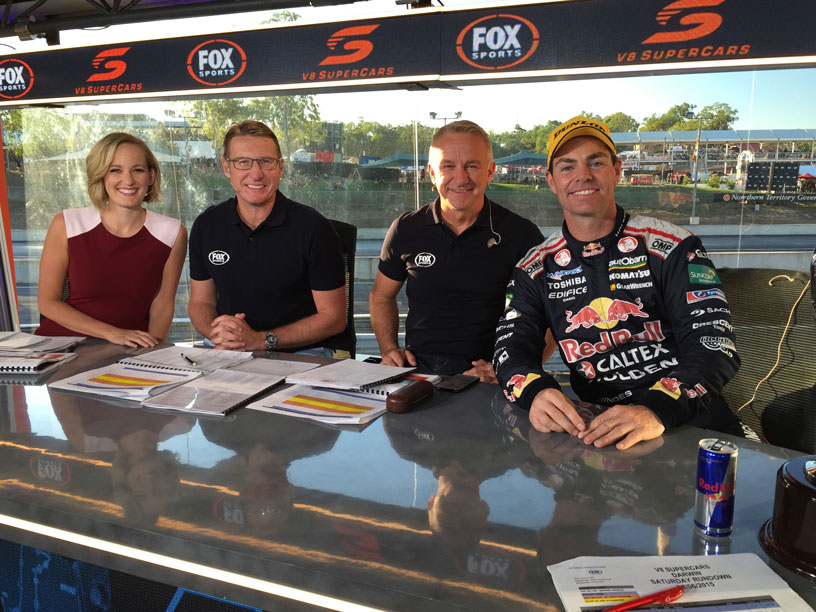 Hidden Valley as usual turned on another great event. I put this race on the “must do for Motorsport Fans” list up there with Townsville, Adelaide and Bathurst. The whole Town and Territory get behind the event and it shows with the enthusiasm of the locals as well as the many thousands of tourists that go there each year.

The commitment from the organizers carried on with a full resurface of the 2.87 km track. Apart from improving the aesthetic appeal of the layout, what it did produce was some of the best racing that we have seen so far this year, especially the short Supersprint races on Saturday which up ‘til now have basically been a bit of a dud. With the grip levels much higher than previous years and the confidence of the drivers to have a go, there was some true hard & fast passing and side by side racing, even up to three and four wide in certain instances. It was so good to sit there and watch the whole field having a big go and throwing caution to the wind, which entertained both the huge live and television audience.

There was a couple that got hard done by from some of the maneuvers, notably Fabain Coulthard, who got sent on the start of both Saturday races, but overall the rest of it was just good hard racing. The Driving Standards Observer definitely had a long list that night, but I was pleased to see that all the penalties were fair and just, apart from Rick Kelly getting a drive through when Whincup only got 25 points for virtually exactly the same sort of incident. I would much prefer to see points penalties than drive throughs unless it is absolutely blatant.

Before I go much further, V8 Supercars have to make a priority with their event de-brief to analyze and understand why all of a sudden the Saturday racing was so good. There is one word for it “GRIP”. A race driver likes nothing more than when a tyre or circuit has a tremendous amount of grip. What this does is increase confidence to brake later, lean on the car more in the middle of the corner and also accelerate harder coming off. When you have increased grip levels, you can feel the car better and it also widens up the circuit so it’s not so single file, hence making more overtaking opportunities. I remember last year when Winton did the botch track repairs and after the first session it spread a “glue like” substance all over the track that made the grip level so high you thought you were driving a Formula One car. The smiles on all the driver’s faces after they had driven on it said it all. It was the same after the first practice sessions in Darwin where all the drivers commented on how much better it was to drive on the new gripier surface.

Now don’t suddenly think this is going to happen at all the other circuits but it can be achieved. I have been shouting out behind the scenes for some time for a softer, gripier and better tyre. The current control tyre is way too hard and at the very least, the soft should be the standard with an even softer variance under that. I doubt whether you would get too many drivers that would disagree with this concept. Not anyone smart anyway.

The other factor that spiked up the races on Saturday was the multiple safety cars over the two races. Keeping the field bunched up definitely helped the battles as the cars were so close in pace from first to last. I know this is out of the control of the Race Officials, but I can tell you, compared to Sunday’s race where a safety car mid way through would have made a huge difference, we might have to start thinking how we can achieve it. I am definitely not a fan of manipulated racing but what I have seen in Nascar where they throw the odd competition yellow has a lot of credit. Remember it’s about entertainment.

Speaking of that, considering there was no safety cars in Sunday’s race, I still think it was a good race with many strategies really playing their part. I believe the three guys on that podium had genuine car speed and deserved to be there. I was very pleased for David Reynolds to finally get that first solo win on the board. There was a bit of chat afterwards about cutting through the circuit when he had his little excursion off Turn 5, but at the end of the day he did everything to the rule book. He had the fastest car in that race and controlled the race beautifully so in my opinion, he deserved the win.

Mostert continues to impress me with his consistent qualifying form and consistent race form. I truly believe if he keeps this up, he will be a championship contender this year.

I have to say, unless something really turns around for Jamie Whincup, the boy could be struggling to get his 7th Championship. Why I say that is the current top 5 cars in the championship as we speak I believe are super strong and just seem to be way more consistent.

Of course one of the biggest stories was Lowndes clocking up the 100 wins on Saturday. During our interview with him in the Fox studio you could really feel the emotion that he had in achieving such a great milestone. It was fitting that he acknowledged his current team as well as all previous ones that helped him achieve that unbelievable record. He is definitely the crowd favorite and rightly so. As I have mentioned in previous interviews, I believe he is the most complete driver of our era, working just as hard off the track as on. He is one of the best ambassadors for V8 Supercars since Peter Brock.

So that’s a wrap. Off to Townsville next. Another great event and one of my favorites where I think we are going to see a bounce back from some of our street fighters like HRT and Tekno so don’t think ProDrive will have it all their own way this time.